Sean with The Chromatic Dragon, in Savannah, GA, contacted us looking for someone to take their concept for a sign and turn it into a real sign for their new gaming bar.  They had reached out to several local sign shops in the Savannah area and no one could produce the sign they were looking for.  The sign needed to be 5’x5′ and double-sided and would be hanging from the corner of their building. The sign had to be ready for their grand opening in a month.   We contacted our friend Jeremy Miller of JMiller Sign Studio (www.jmillersign.com) for assistance.  Jeremy has been creating beautiful signs for many years and we have worked closely with him on many projects.

The original designed called for the sign to be cut as one 3d object. Working with Jeremy and Sean, we looked at the best way to cut the sign taking into consideration ease of painting, assembly, and transportation. Jeremy suggested cutting the dragon, border and background as separate pieces. The dragon was going to be cut as a single 3d object in 2″ HDU. After simulating the cutting of the dragon, it was too thin around the edges, so Jeremy decided to add a 1/2″ layer of HDU to build up the thickness of the dragon and to give it more depth.  For the “The Chromatic Dragon” letters and text outline we decided to cut the prismatic letters and borders as separate pieces.  Building up the borders gave the depth we were looking for.  This worked out very well; it made the letters easier to paint and the letters appear as if they were popping out of the sign.  The wood-grain on the background was hand-carved by Jeremy. Jeremy did a great job, his hand-carving and painting skills worked out great.  What do you think?

If you are ever in Savannah, check out our work and The Chromatic Dragon. They are located at: 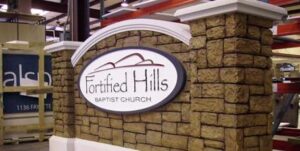 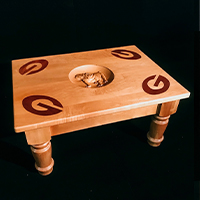 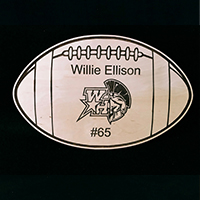 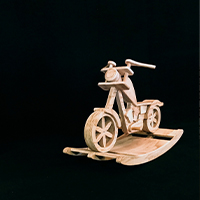